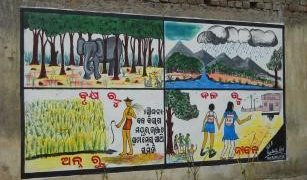 Simlipal Tiger Reserve (STR) is part of one of the largest contiguous tiger and elephant habitats in the world. With a Biosphere Area of over 5,000 sq km, it is one of the most promising landscapes for tigers and their prey species. After a number of elephant deaths were reported in April and May 2010, the National Tiger Conservation Authority (NTCA) constituted an independent assessment team on 3rd June 2010. The two-team members recommended local community support from peripheral areas bordering the Park.  During the field visit, the team met with and interviewed a large number of stakeholders of the Tiger Reserve, including the local MLA, the RCCF, the Field Director and the Deputy Director, the ACF, Range officers, Foresters, forest guards, casual laborer, members of the Simlipal Tiger Protection Force (STPF), the then Honorary Wildlife Warden and her team, and local villagers.

It is suggested that continuous follow up of this programme is necessary to ensure active involvement of the community in protection of Forest and Wildlife. Alternate livelihood programme for Haati Mera Saathi groups may be implemented to reduce their dependence on forest.